View this story at Monrovia Weekly

On a cold, blustery December night, traveling on VIA Rail Canada, a sleep-deprived doctor mourning his wife’s tragic death played Bach Partitas on his violin to sing him to sleep, but to little avail.

Before the journey, the doctor’s wife was hit by a serious mental illness in 1995, after his first two years of USC medical school. Within two weeks, he left his hometown to spend a year at Oregon Health Sciences University to be near her. There, he performed as a part-time violinist with the Columbia Symphony Orchestra.

The doctor and his wife completed residency training and went on into practice together as family medicine physicians. The doctor then went to Stanford for a fellowship in palliative care. They practiced for three years at Hoag Hospital in Newport Beach until she tragically passed away on Nov. 24, 2011.

Consumed by grief, he closed their practice and went on a trip across Canada the following year.

An acoustic performer hired by the train saw the doctor’s distress and suggested he share his grief in a performance to the train’s passengers. The next morning, the doctor picked up his violin and played Bach’s Partita No. 3 as travelers sipped wine in the skyline cars. The experience was cathartic; the wordless song rippled through chromatics and fast rhythms but flowed, seemingly endlessly.

Until that morning on the VIA Rail, he had never had a public, non-recital performance, and was taken over by a state of trance, along with the passengers, who swayed and grew teary eyed. Beyond the train passing Edmonton, trees glistened in the falling snow in below 20-degree weather.

With a renewed sense of optimism, energy and amazement, the doctor, Adam Kendall, was finally able to find peace, and seeing the effect of his performance on the audience was the springboard into a life of community activism and street performance.

Kendall returned from the trip to Southern California in mid-December, obtained a performer’s license and played on Third Street Promenade in Santa Monica. Shortly thereafter, Kendall’s new performance venue moved to Old Town Monrovia outside his apartment at the Paragon. Since 2013, he performs at the Monrovia Street Fair every Friday night. 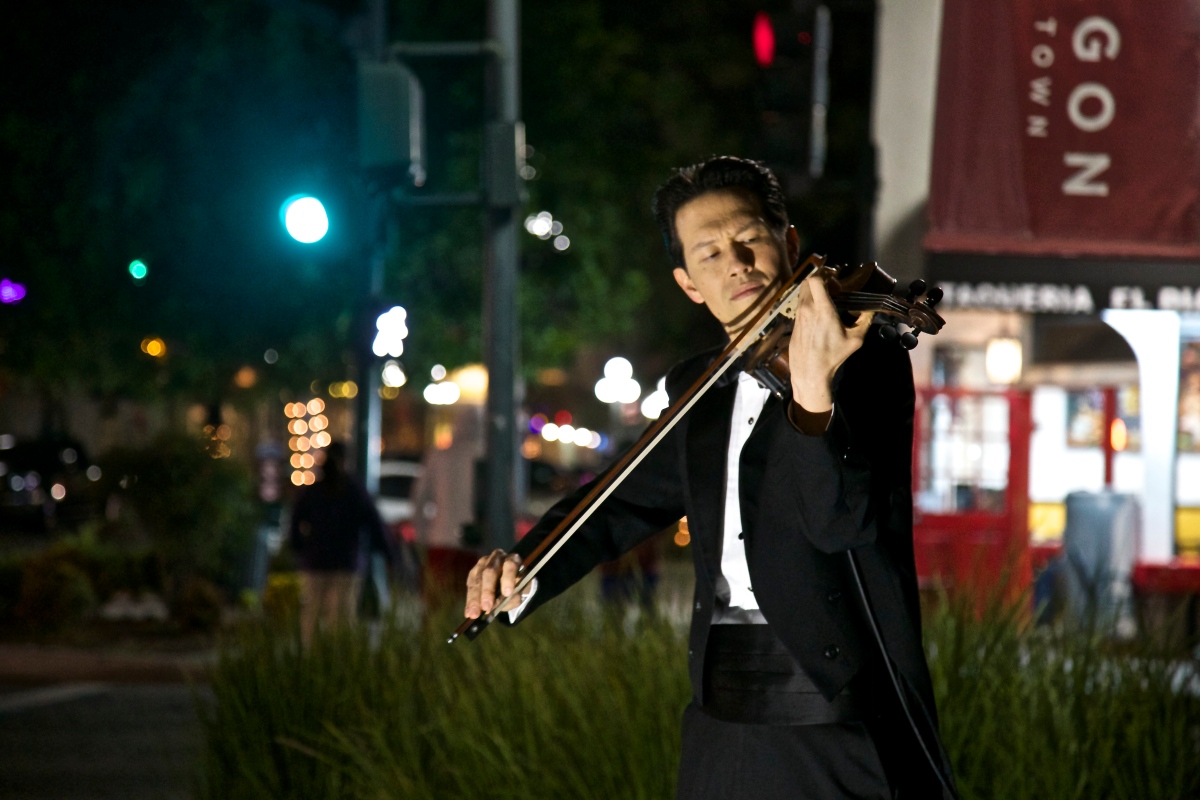 Regular street side performance and street side listener gatherings is a relatively new phenomenon in Monrovia, compared to cities such as San Francisco, Santa Monica or Boston.

“It was something out of the ordinary just outside Old Town Myrtle,” said Monrovia resident Shiranee Perera. “Dr. Adam brought in a lot of lonely people who are living by themselves, the senior people, [who would] come and sit and enjoy.”

To provide the ultimate classical experience, Kendall, 41, dresses in a black tuxedo and hauls his 600-pound, full-size, upright 1980’s vintage Yamaha U3 piano and his Hopf knock-off violin in shine or rain. Even on rainy days, “a ship was not made to stay in the harbor”, he explained.

By performing in the rain, risking damage to his instruments, Kendall said he hopes to encourage others to “place themselves in a state of insecurity and to take a risk in order to make a change in the world.”

Though maestros by the likes of Itzhak Perlman and Yo-Yo Ma battled with cold temperatures and humidity, Kendall – after quite a few visits to a violin luthier – hangs his violin outside his shower to maintain constant humidity and improve his violin performance on cold, wet December nights.

On this particular December night before New Year’s Eve, not only did the violin bear the weather, but 37-year Monrovia resident David Butler did too.

“I would just walk on by,” he said. Though entertainers came and went, Kendall was the one constant who also happened to capture Butler’s attention.

Fridays were convenient for Butler: he could sit down, take a load off from the workweek and finally relax.

Retired, 82-year-old Ed Nilson says although he enjoys the bands the street fair brings, he prefers when the performer, like Kendall, is from someone inside the city.

In his three-to-four hour-long “art installations”, as Kendall calls it, excitement and joy can be felt in Scott Joplin’s “The Entertainer”, consolation in Jesu’s “Joy of Man’s Desiring” and spiritual strength in “Ave Maria”.

Kendall would introduce a song, compliment the audience and end with a bow as his sidekick Barney, a rescued Bichon Frise, sits on a dolly by his side. Kendall’s partner and patroness Jeannette Santana accommodates the audience with a set-up of chairs and heating pads. Habitually, crowds would gather to hear Kendall and children would approach Barney gingerly – at which point Kendall would say, “It’s ok to pet Barney.”

Together, Barney and Kendall are “all part of the entertainment value,” said Butler.

“He was very well-rounded in repertoire that he could play anything to spark the interest of different generations,” said her mother Sarah Gallegos.

Upon hearing Kendall would become her teacher, Olivia beamed, thinking she was to be taught by a celebrity.

Today, 12 students are taking private lessons with Kendall at St. Luke’s of Monrovia, a local church that donated its music hall and instruments to Kendall and his students. Kendall’s lessons are free of charge, though he welcomes donations to locally operated charities.

“Everything he does is very special,” said Gallegos, whose 3-year-old son Dylan just began taking lessons on piano and violin. “It’s just like a dream come true to have him in our community.”

In 2014, his performances raised over $25,000 for Foothill Unity Center, Inc. and Bloom Where Planted, an African Children’s Fund charity that supports secondary education in Kenya.

Adam Kendall plays one of his favorite pieces, Bach’s Partita No. 3, a piece that evokes great deal of emotion. Photo by Malak Habbak

“If good people come together, we can make an impact on those who need us in their darkest hour,” reads Kendall’s website.

Kendall – who lives in a rented room, drives a 1995 Volvo and has a mortgage payment on his student loans – says if in 15 years nothing has changed he wouldn’t be any less happy about where he is in life.

He says his one purpose in life it is to help the people around him find a place of healing and an interest in being a part of humanity in a way that they can make a difference in the world around them.