View this story at Pasadena Independent

The sun shined on Saturday as hundreds convened at Pasadena for a Women’s Rally and later at a Women’s March in downtown Los Angeles, one of nearly 50 in the state and 673 across the globe.

Hundreds gathered at the Pasadena City Hall Rotunda for a Women’s Rally. Photo by Malak Habbak.

“When they go low, we go local,” said Pasadena High School senior Gabriella Villegas to a crowd of over 500 women, men and children at the steps of the Pasadena City Hall Rotunda.

Event organizers encouraged the public to join existing local organizations– quoting former President Barack Obama on their Facebook page– to “restore the sense of common purpose that we so badly need right now.”

Rally participants clamored for civic engagement and celebrated human rights before boarding the Metro Gold Line to join a Women’s March in Los Angeles that drew 750,000, according to event organizers.

Protesters occupied a large portion of downtown Los Angeles in numbers organizers estimate to be about 750,000. Photo by Malak Habbak.

“I think this presidency sort of was the straw that broke the camel’s back,” said Monrovia Resident Donna Baker, who met up with her sister Rose McCabe and friends Cathy McCallum, Isabel Cobos Houser and Mary Ann Lutz in Pasadena.

Baker, who witnessed the second-wave feminist movement in her teenage years, had participated in anti-nuclear protests during the 1970s and 1980s and the Greenpeace campaign against the clubbing of baby seals off Canada’s Newfoundland and Labrador coastal regions. Yet Saturday’s event seemed one of her biggest priorities.

Hundreds of thousands of people shared messages that extend beyond women’s rights. Photo by Malak Habbak.

“We’re all humans when you cut right to the chase,” she said.

Irma Cooper, a speaker at the Women’s March and president of LA’s Chapter of The National Association of Black Military Women, said the country has been seeing progress, “but it is slow.”

Cooper, who served in the United States military for 30 years as a registered nurse, recalls the days women were not allowed to command hospital units.

“That was a great achievement when women were starting to command,” said Cooper, whose first command in California was the largest in the state with over 5,000 soldiers.

“We are not against [President Donald Trump] but we want to make clear [we] have a voice and our voice will be stronger as we unite.” 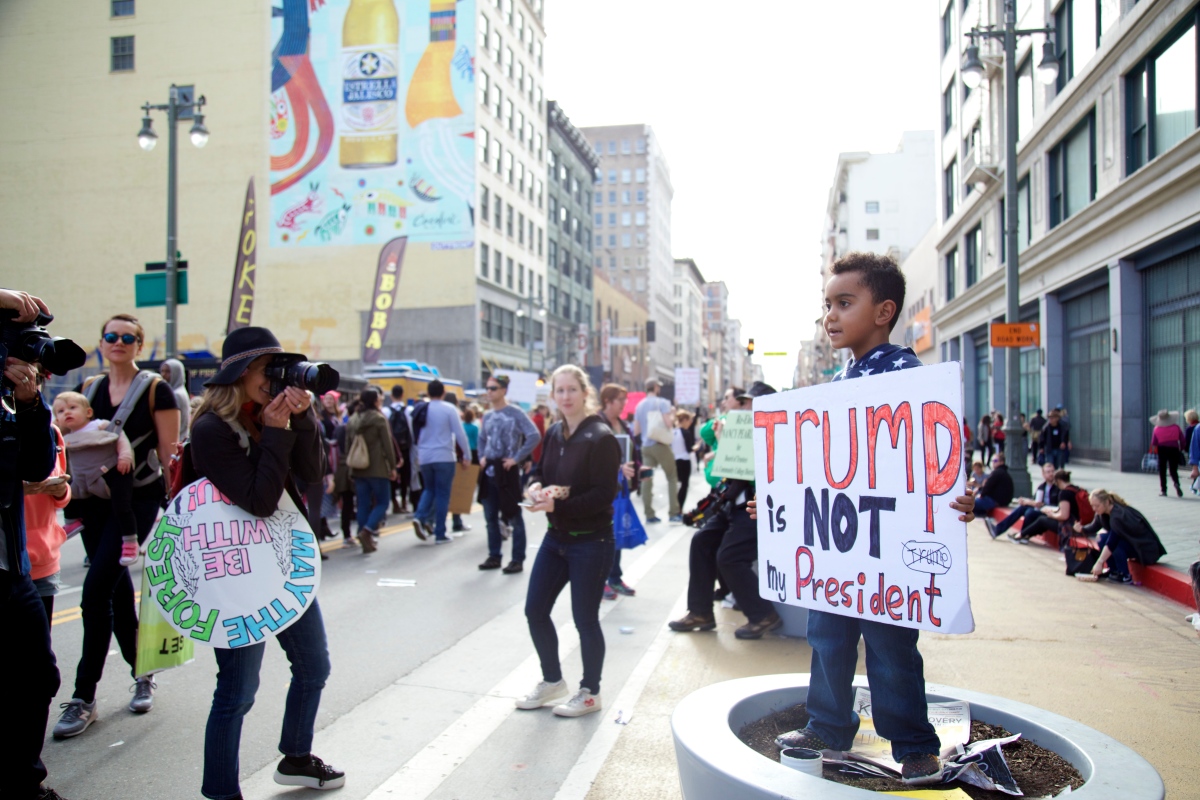 Kennedy, 4, held a poster that read, “Trump is not my president” near Pershing Square. Photo by Malak Habbak.

Jan Sanders, Pasadena resident and chair of the Women’s Rally in Pasadena, said the rally was in part created to ameliorate feelings of discouragement due to Hillary Clinton’s loss of the election, “not necessarily Trump’s winning of the election.”

Yet much sentiment at the rally and march was directed towards the president, sworn into office the prior day. To those who were angry, scared and unsettled, state Senate President pro Tempore Kevin de León (D-Los Angeles) addressed the crowd’s concerns at the rotunda.

Kevin de León (D-Los Angeles) told a crowd in Pasadena it was a woman, his mother, who paid rent to put a roof over his head. Photo by Malak Habbak.

“One election and one man will not change the values of the great state of California,” de León consoled the crowd. The state “will be there for each and every one of you.”

The 2016 presidential election was a “tragedy” for McCallum, a 66-year-old Monrovia resident. 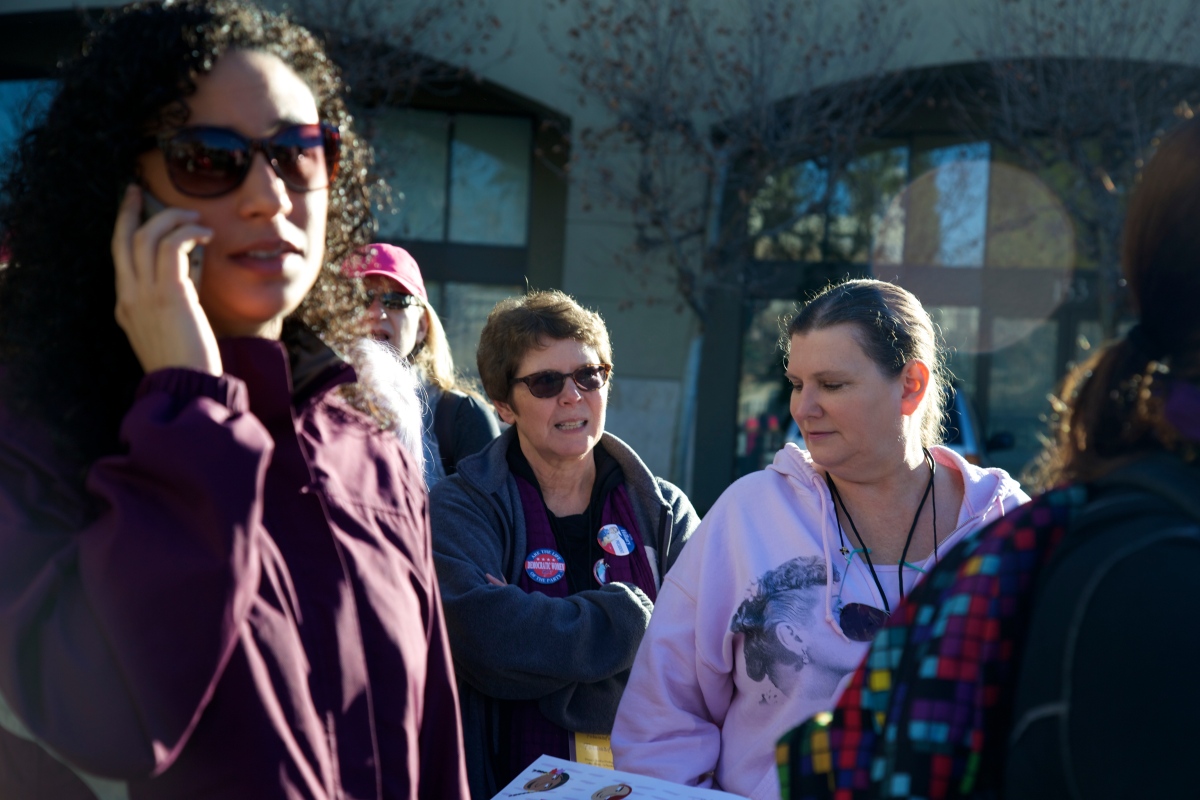 Cathy McCallum (center) stands in line for over an hour to board the Metro train to get to downtown Los Angeles from the rally at Pasadena City Hall. Photo by Malak Habbak.

On election night, her 25-year-old daughter Julia Fouser sent her a chilling text, “I’m going to lose my healthcare.”

Fouser was one of the many reasons McCallum decided to attend the Pasadena rally and LA march. For one, Fouser has a pre-existing condition. And two, Fouser is a lesbian.

On Friday McCallum packed a bag with a jacket, water bottle, snacks and prescription medication she needed on a daily basis; her husband loaded her TAP card so she would be ready to board the Metro train the next day.

McCallum was blown away by the multitudes of individuals and families lining up at the stations’ platforms and taken aback by the “pure love and kindness” people seemed to show for each other.

Despite prolonged Disneyland-like lines, people clapped and cheered as trains that came and left the terminals carried passengers with pussyhats and boisterous posters. 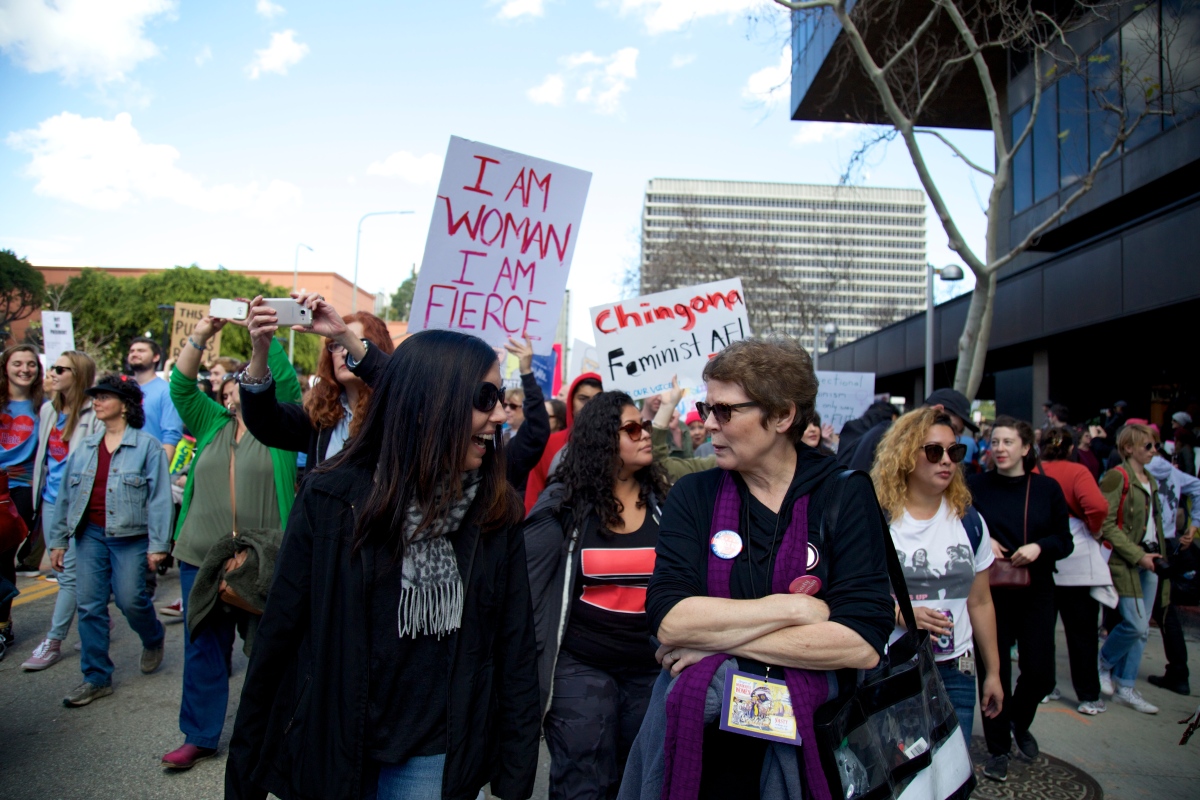 Cathy McCallum (front right) marches back from City Hall to Pershing Square and makes acquaintances along the way. Photo by Malak Habbak.

“I’ve never seen people in a group size that big being so nice to each other,” said McCallum, who had not attended a protest since the Vietnam War.

McCallum waved back briskly to gleeful children whose faces were glued to the windows aboard the trains.

“It’s never been this packed ever,” said Nalani Coleman agreed.

Alta Dena resident Lauren Marks (left) posed for a photo with her family at Memorial Park Station. She joined the rally and march after her life was saved by Medicare when she had a brain aneurism in 2008. Photo by Malak Habbak.

Among those waiting to board the train was Alta Dena resident Lauren Marks, who came to march with her parents and son, carrying a poster that read, “My baby’s grandma can’t believe she still has to protest this [expletive].”

North Hollywood resident Ellie Reed decided to take an Uber to LA to escape the long wait at the Metro stations. Upon arriving to City Hall, she told her friends, “This is the happiest I’ve felt since November 7.”

Crowds huddled before a panel of speakers near LA City Hall. Photo by Malak Habbak.

“It’s so incredible,” Congresswoman Judy Chu (D-Pasadena) told crowds in LA, “and to think about what’s happening all across this country, over 600 marches, over 2.2 million women fighting for their rights.”

“This cannot be the only time we come together,” said Sue Dunlap, president and CEO of Planned Parenthood of Los Angeles. “This is the beginning of standing up for all our communities.”

Hundreds of posters hung on a wall near Grand Park. Photo by Malak Habbak.

Near the end of the march, people hung their posters on a wall near Grand Park in a symbol of unity.

“We will not let darkness prevail,” said Hannah-Beth Jackson (D-Santa Barbara). “It is morning in Los Angeles.”